In 2007 Steven Pinker, MIT-Harvard neurolinguist, published The Stuff of thought, which complements his magnum The language instinct. Anyone interested in understanding human language and thought, and the miracle of the human word, will enjoy these two books, as well as the present video.

Here, Pinker examines the way our human languages work, how they express what happens in our minds, and how the words we choose communicate much more than what we realize we are telling.  He also indicates that through analyzing human languages, we can come to understand both our species and our minds –our nature.

The price Pinker pays to stand for the universality of the human species –for the existence of a series of common traits that are innate to us by nature,  is ideological, as ideological is the opposition to his work, despite the fact that it is precisely this common human heritage which makes us all equal in dignity, no matter the demographic categories we may fall into (age, gender, race, income, location, etc.).

That is why, he opens his talk by pronouncing himself against the concept of linguistic correction.  Unintended pun, indeed, as this concept –pervasive as few others, is also wired into our human neural networks …by nature.  We cannot talk about diacronicity (the history and evolution of language), without talking about syncronicity (structured systematic variances of language coexisting in a given place at a given moment, which are habitually related to the human groups with which we interrelate, and which are subject themselves to the natural dynamics of human groups).

In the end, however, the key point of this talk for us in this web, is the public recognition by a top neurolinguist, that previous to the word –previous to the form, shape and channel we may choose to transmit a message, there is a communicative intention –the content we want to transmit, the message itself.  Everything else depends from it, and derives from it, as we will incredibly addapt any available means and resources, to achieve the transmission of our communicative goal: our message.

What is accidental (in phylosophical terms), will always remain secondary to what is essential.  Fireworks may shine bright and spectacularly, but what our memory holds to –what it remembers, is the event we celebrated: a wedding, a national holiday, a sports victory.

That is why the digital revolution is less relevant to media, than adequating their contents to the tastes, values, ideas and beliefs of their target audience. 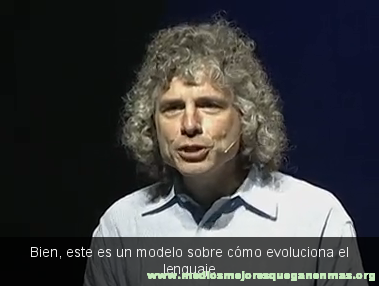