We find some foreign cities both amazing and disappointing. Their broad boulevards, mile-long blocks, mirrored buildings, cleanliness and order, amaze us. Their barren sidewalks, cold coffee shops (literally freezing, since the air conditioning is used to “drive” people out, so other customers can occupy the tables quickly), and the lack of the bustle and chatter of people are …disenchanting. Seeing somebody else on the street, in fact, doesn’t make one feel safer; it may even scare you. Our cities have “life” because there are people out walking, musicians, street markets, people at their windows, human groups of all ages chatting excitedly ─or just playing─, newsstands, touts, con artists everywhere…; and coffee shops or food stalls along the sidewalks and in the squares, with temperatures that encourage customers to enjoy themselves in a leisurely way.

Newsstands are part, then [in 1995, when this article was first published], of the personalities of the different Mexican cities; and they humanize them. One goes there not only to purchase the latest magazine, but also to talk about the last one ─above all if one was unable to buy it─; to find out how the newspaper seller’s children are doing, and to hear other customers’ news. One finds out what is going on in the neighboorhood, as well as the latest celebrity news at newsstands; people exchange recipes and encouragement at the beginning or the end of a long working day. We often end up buying more than we planned, because the seller ─familiar with each client’s tastes─ recommends a new publication to us. The seller at the newsstand I go to, is named María Elena Razo Rosales de López, and she has sold me hundreds of magazines, comics and novels over the course of my life. The newsstand, in spite of the owner’s hard work and the kindness, is not [back in 1995] what it used to be. Why is that?

1) The sales of magazines in supermarkets ─“Because people save themselves the trip to the newsstand”, María Elena tells us─;

2) the proliferation of publications ─“There are more than 8,000 publications on sale nowadays; it’s impossible to display them all on the racks so people can see all the covers”─ [in fact, there are over 12,000, judging by the number of title certificates issued by the “Dirección General del Derecho de Autor” (later: Instituto Mexicano del Derecho de Autor, or Copyright Office), in Mexico]; together with…:

3) minimal differences between publications ─for example: “Eres” (You), “Somos ” (We) and “TvyNovelas ” (TV-and-Novels) have the same articles, and the same [advance] summaries of the same telenovelas” [Note: The latter stopped being published a few years afterwards…]─. Of course, this repetitiveness of subject matter, means/entails…:

4) less varied contents ─“When the Pope’s book came out, I sold many copies; had I received more, more I would have sold, since they never send me nice books on religious subjects; but instead they sent me so many copies of “Las Confesiones de una desvergonzada” (Confessions of a Shameless Woman) that they didn’t all fit on the rack. I don’t mind selling that stuff [publications only suitable for adults]; but the customers who buy them are always the same, and just because there are more publications, they aren’t going to buy more. Meanwhile the other customers ─the majority before, stop coming because they feel uncomfortable and unhappy here [although they don’t always know why]”. This is connected to another factor related to newsstands’ declining sales, which is…:

6) the loss of the right amount of originality, from the standpoint of popular literature, since readings should never be more original than readers anticipate, nor be limited to a mechanical repetition of previously published material ─“They used to be interesting…, things happened in novels; not like nowadays where they’re all very similar, or very strange and unpleasant”─;

7) “not much” considering the price one pays for magazines. In their heyday, “Pepín“ and “Paquín“ ─to give two examples─ gave us a number of serialized stories at a very low price; and the daily chapters that gave us something to read on the way to work every day, mattered more than whether the paper was cheap or the ink was sepia. And since all kinds of people ─different age groups, habits, classes and educational levels─ liked them, groups of people agreed to buy them in turns, so that they could read them all without having to spend very much; this way everybody got a lot, daily, and for not much money. And finally …:

8) the lack of big advertising campaigns ─“When “Corazón salvaje“ (Wild Heart) came out in photo-novel format [stripes of photographies, on paper, telling a story], I thought it would sell very well; but people didn’t know about it because there hadn’t been any publicity on television or in magazines. And after the first one comes out, whoever didn’t buy it, doesn’t buy the rest of the series even though they could get hold of the first one.” And when word of mouth finally got around and people started buying the successful telenovelas in photonovel format, the company took them off the market ?’because they hadn’t reached the level of sales they had hoped for…’ How could they, since they didn’t wait long enough for people to find out about them and get into the habit of buying them…?”

What is selling well? [back in 1995]:
“Although you may find it hard to believe, ‘educational’ magazines (on English, medicine, whatever); and also videos that aren’t sold in video stores, “Vanidades“ (Vanities) [a womens’ magazine], “¡Hola!” (Hello!) [a gossip magazine published in Spain], novels that take place in other countries, home decorating magazines, nice religious things, and ─although not so much anymore─ ‘digests’ [cheap books offering one long melodramatic story in stripes, on cheap paper and only black or sepia ink; until then sales champions in the Mexican magazine market] [“Libro Vaquero“ (Cowboy Digest), “Libro Semanal” (Weekly Digest), and “Libro Sentimental” (Romance Digest) [─in fact, their sales dropped so much, that they were taken off the market a few years afterwards]. Now we really sell a whole lotta nothing”. María Elena has been [in 1995] working at her newsstand for 26 years; she works every day except December 25 and January 1. She is very knowledgable about her business, her merchandise, and her customers; and that is why she was able to provide us with a summary of why the Mexican magazine market is in decline, without spending a fortune on a market analysis. Don’t be surprised, reader, when a number of different sources confirm her words. We hope publishers and distributors realize they are ruining their business. It’s their fault that newsstands are in danger of dying out, dehumanizing a little bit more, life in our cities.

In the years elapsed since publishing the above article, the credibility of the press has fallen more each day. And not only due to a number of scandals [cfr. for example the one involving the British tabloid The Sun, owned by Murdoch], but also due to the increasing pressure on contents, by their stakeholders (“interest groups”; that is: shareholders, advertisers, financial partners, political authorities, activists, etc.), in opposition to what the readers would want and really need to find in their pages.

But above all: The decline in the media markets became imminent due to the slow, but cumulative and efficient, operation of that part of our brain that the neurolinguist Steven Pinker calls “the Cheater Detector”, which searches for inconsistencies, deceit, bias, fraud and lies ─or information that negatively impacts on healthy coexistence within society, in accordance to its culture, its values, ideas and beliefs, and the needs of the times─. This part of our brains is essential since, in order to make productive decisions for our survival, we need information that truly closely reflects reality, and organizes it according to our values, ideas and beliefs.  We talk about this in another recent article (“The Workings of our Brain and Human Expression; Implications for Literature, Research and the Media”, 2012).

It is worth bearing this in mind while reading the present article, since ultimately the media have been destroyed by the lack of relevance, usefulness and veracity of contents, and their increasingly evident hostility towards their target public’s values, ideas and beliefs. The top executive of a Spanish media conglomerate, recently stated: “it is tempting to paint moral utopias regarding the media, instead of solving how to finance them”. That said, there is no way that the media can become financially self-sufficient, while lacking the autonomy and freedom necessary to adapt their contents to their target public’s needs, opinions and means. …Neither idealism nor ideology are the matter here: This is all about human nature, and how it works for survival. 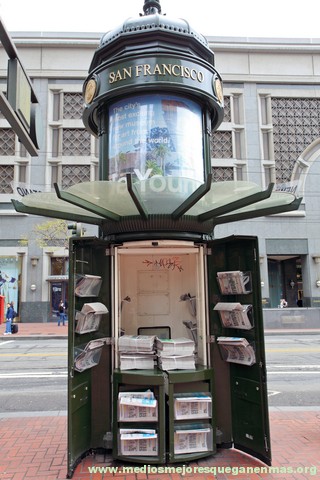